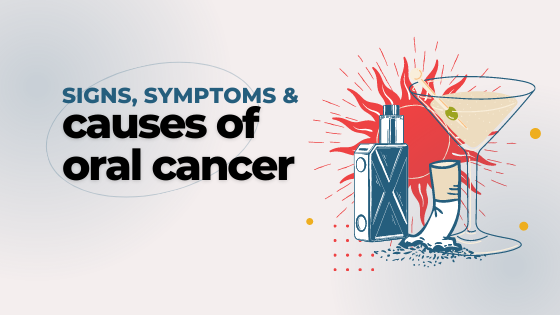 April, a month that’s filled with beautiful spring weather, the sun is out longer, which means summer is getting closer. April is also the month to raise awareness of a cause very important to us, and one that could affect us all. It’s Oral Cancer Awareness Month. According to the Oral Cancer Foundation, approximately 54,000 people in the United States will be newly diagnosed with oral cancer this year. That means, 132 new people will be diagnosed every day here in the U.S. So, let’s take this opportunity together to highlight the importance of early detection and examine why oral cancer screenings are important for everyone’s health.

Did you know that oral cancer refers to any cancer that impacts the lips, tongue, gums, inside of the cheeks or roof, or floor of the mouth? Although it is less talked about than the other common cancers, oral cancer is the sixth most common type of cancer in the world. The signs and symptoms are easily overlooked and brushed off as “small problems.” Unfortunately, this makes oral cancer even more deadly as most are diagnosed in the later stages. One of the most common signs of oral cancer includes a lingering sore in the mouth or on the lips. The kind that doesn’t go away or ever fully heal. Other symptoms include:

What Causes Oral Cancer in People?

It’s also very important to note that one or more of these symptoms does not mean you have cancer, only that if symptoms are present for more than two weeks, you need to make an appointment to see us, your dentist. Now that we’ve talked about the symptoms of oral cancer, let’s dive into some of the reasons that could cause it to appear. The greatest causes of oral cancer, after tobacco, are:

Most people will develop oral cancer from their tobacco use. According to the American Lung Association, cigarettes, the most common form of tobacco, causes 90% of all lung cancer. People who smoke are at 10x higher risk for oral cancer compared to non-smokers. In addition to that, cigarettes contain more than 60 known cancer-causing agents. If you need help to quit smoking, talk to us!

How Safe is Vaping?

By now, we’ve all heard about e-cigarettes, vape pens and vaping. A lot of young people, including under-age teens, prefer getting their nicotine intake from various vape devices. Originally advertised to help regular smokers separate themselves from cigarettes, vaping sounded like the safest option. It’s now proven to not be safe at all, just slightly less detrimental to one’s health than smoking. But is it common knowledge to know what’s inside of them and how it can eventually lead to oral cancer? E-cigarettes/vape pens are portable devices that heat up nicotine (extracted from tobacco). They can include flavorings and often have a myriad of other chemicals to create an aerosol that’s inhaled. In 2020, there was a huge outbreak of lung injuries and deaths that were associated with vaping, which checks out because it was reported in 2020 that an estimated 3.6 million U.S. middle and high school students said they’d used or tried using e-cigarettes. In February 2020, the Centers for Disease Control and Prevention (CDC) confirmed 2,807 cases of e-cigarette or vaping use-associated lung injury and 68 deaths that were connected to vaping.

The statistics for the next year weren’t any better because according to the 2021 National Youth Tobacco Survey, more than 2 million U.S. middle and high school students reported using e-cigarettes in 2021. With more than 8 in 10 of those using flavored e-cigarettes. Flavor vapes are a prime attraction to try and start regularly using vape pens. Young people and adults find the lack of smoke appealing, with no overpowering smell, e-cigarettes have reduced the stigma of smoking. A lot of people are attracted to the taste of e-cigarette flavors, which also contributes to people incorrectly believing that vaping is a less serious health risk compared to smoking actual cigarettes.

We should all know by now that cigarettes and secondhand smoke go hand in hand, but a lot of people do not know that secondhand vaping can also affect those who are around to breathe in the smoke. Nonsmokers get exposed to ultrafine particles from secondhand vape aerosol, which may increase the risk of cardiovascular disease as well. Secondhand vape aerosol can affect anyone, but certain groups have a higher risk. Those groups include infants and children, pregnant people, and people who have lung conditions. Secondhand vaping may seem like it’s no big deal, but the aerosol being exhaled from vaping contain a lot of the same chemicals that have been resulting in serious health problems for people who vape and those around them.

After realizing how smoking cigarettes and vaping could lead to cancer and cardiovascular disease, the question that lingers is… now what? What can we do? No one wants to live in fear of getting oral cancer or worry about the risk factors so, let’s talk about what we can do to lower our risks:

Due to low public awareness of the signs, symptoms, and risks, most diagnoses and death from oral cancer is because of late detection. This month is dedicated to saving and improving the lives of patients and survivors, increasing awareness, and providing education to those who have no idea how harmful oral cancer can be if not taken seriously. Oral cancer is a highly preventable disease and it’s also very treatable if caught early. We should all make sure that everyone knows what oral cancer is and how we can better our health to avoid any complications. If you’re smoking cigarettes, or puffing vapes and want to quit, talk to us. We can help, schedule now https://www.dentalhealthofsf.com/request_appointment/